Whilst we probably could have stayed in Serbia for another week and hit up the National Parks, the days are starting to run out for us to get down to the Greek Islands in time for the last throws of summer and Carissa’s 30th in mid-October.

So onwards we go on our journey towards the Ionians and onto Bosnia & Herzegovina, starting with it’s famous capital, Sarajevo. We only got to spend three nights here; whilst this was enough to get a good flavour of the region, there’s still a heap of things we want to come back and do.

Aside from hosting the Winter Olympics back in 1984, Sarajevo is famous for two things; firstly, it is the place that Franz Ferdinand got assassinated back in 1914 which ultimately led to the start of the first world war. Secondly, it was the location of a fourty-four month siege between 1992 and 1995 during the course of the break-up of the Yugoslavian empire.

As a result of these things, this blog entry may be a bit more ‘fire and brimstone’ than my usual posts but I’ve really enjoyed finding out a bit about the history of this area and it would be inappropriate to write a blog on Sarajevo without touching on it.

Things to do in Sarajevo

The first thing we did in Sarajevo, as we do everywhere we go, is to get on a walking tour to find out a bit more about these events.

Below is the bridge in which Franz Ferdinand and his wife Sophie met their end. The cafe where Gavrilo Princip popped out from to shoot them both has since been converted into a museum. 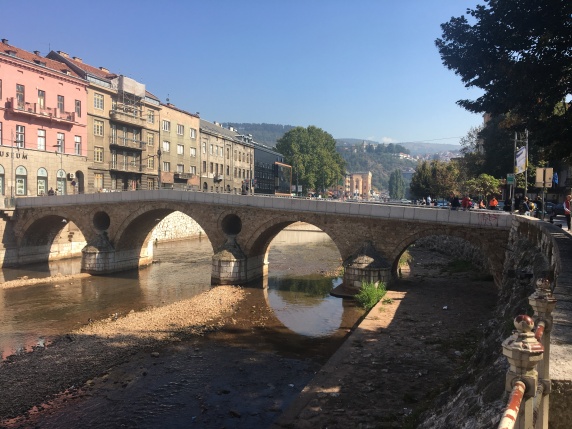 Whether the assassination of the Archduke was a good or a bad thing will vary depending on who you speak to in Sarajevo; the official line has been changed a number of times over the years. However, the allied victory in WWI, which resulted in a break-up of Austria-Hungary, freed the country from it’s rule by the Hapsburg empire and gave it the freedom that the assassins were fighting for. 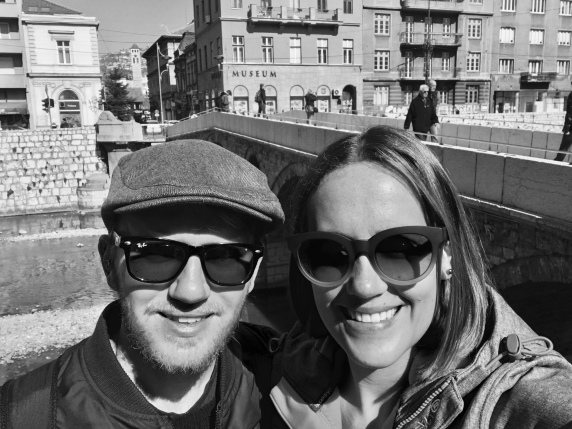 Whilst there are bits and pieces in the city with some history on the Franz Ferdinand assassination, the main stuff to see in the city is in relation to the siege in the 1990’s as part of the break-up of Yugoslavia.

Bosnia & Herzegovina is one of the more ethnically diverse countries in the balkan region, so the separation of it from Yugoslavia was always going to be a bit complicated. The country is split between Serbs, Croats and Bosniark’s, each with different political views.

The siege of Sarajevo lasted almost four years and claimed many victims. In one of the parks there is a monument to all of the children that lost their lives in the conflict: 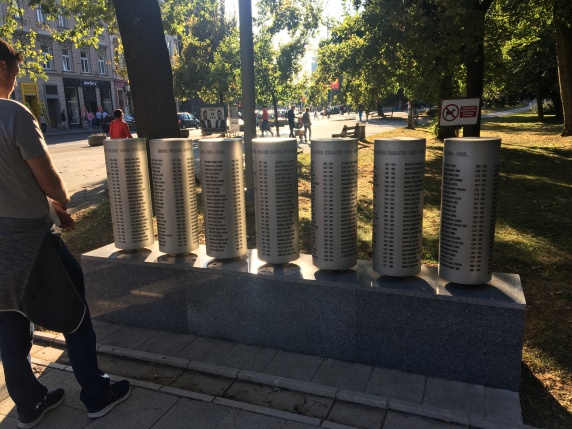 Once we found out a bit about the balkan wars and Sarajevo siege on our walking tour, we went to a couple of the local museums to learn a bit more. Two excellent museums were the Museum of Crimes Against Humanity and the Museum of Childhood Memories.

The Museum of Crimes Against Humanity is quite graphic and intense, but delivered a message that was important to convey. The Museum of Childhood Memories has been recently opened and contains a number of artefacts which have been donated recently by people who lived through the war as children.

Where to stay in Sarajevo

We’ve been loving some of the hostels in this part of the world; as a lot of travellers tend to be moving on a similar route, most hostels have recommended hostels in their next destination.

It’s good to take advantage of this as the recommended hostels are usually in a similar style depending on what you are looking for. As our partying days are mainly behind us, we’ve been staying in a lot of small hostels with an intimate and family feel.

Our friends at El Diablo hostel in Belgrade recommended ‘The Doctors House’, which was a great place to stay. It’s a ten minute walk out of the town centre and at the top of a huge hill, but the views when we made it up there were definitely worth it.

We only had three days in Sarajevo and as a result we couldn’t get everything in that we intended, especially as we had some pretty bad weather on the last day.

We were keen to check out the abandoned Bobsleigh track which is at the top of the big hill and accessible by cable car, and also the Sarajevo Tunnel of Hope, which is a stretch of bunker which was built from Sarajevo to the Bosnian held territory out of the city which was being controlled by the UN.

Sadly both will have to wait until next time, but given how much we enjoyed Sarajevo we’ll definitely be back 🙂