After leaving Kandy, we were looking forward to arriving in the centre of the country, to the fresh green countryside and slightly cooler temperatures.

We took the train, which is the most popular (and cost effective) route from Kandy to Nuwara Eliya. There has been a surge in popularity of this route in recent years to the point that first class tickets with viewing areas sell out a month in advance.

As we weren’t that organised, we had to make do with a second-class ticket which unfortunately meant that we were standing/sitting on the floor for the entire four and a half hour journey. However, we luckily managed to jag a spot by the open door, which made for some breathtaking views and a bit of fresh air.

Our first stop was the tea village of Nuwara Eliya, which has earned the nickname of ‘Little England’ due to its lush countryside and dreary weather (it rains a lot here!). The landscape here is littered with tea plantations, and as a result, it is one of the poorer towns in Sri Lanka due to the low wages that are paid to the plantation workers.

The locals we encountered were friendly but there is genuine poverty in the area; on our trip to the tea plantation, our tour guide said that it was her goal to save enough money for her children to be able to move out of the area to other parts of the country where there were a greater variety of employment opportunities and the chance to earn a bigger income.

Hearing these testimonies first hand was a bit of a leveller. Previously, I have never fully appreciated the value of being a native English speaker, but in places like Sri Lanka with an emerging tourism economy, it is highly sought after.

The National Park is also home to ‘World’s End and Little World’s End’, a cliff-face with an 800m drop! 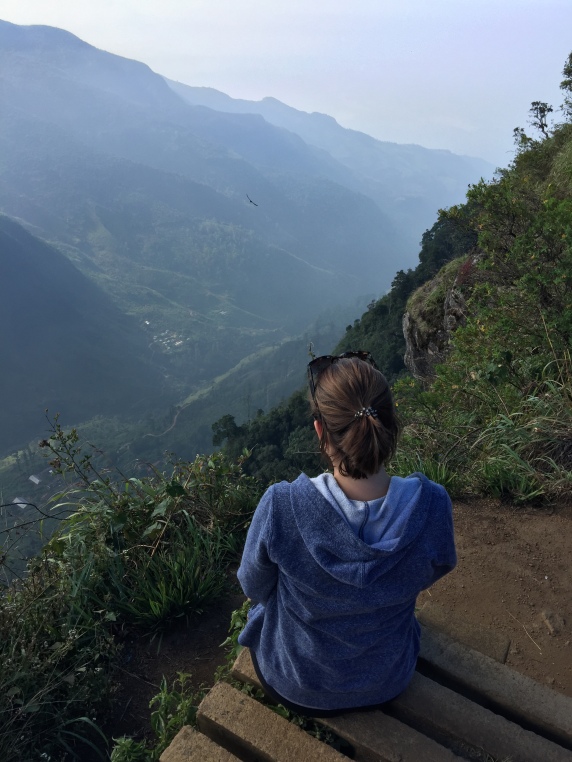 Before we left Nuwara Eliya, we had time to visit Pedro’s Tea Plantation, located near to our homestay, which was a great indoor activity to do whilst it was raining outside. From Nuwara Eliya, tea is sent to auction in Colombo before being exported all over the world!

Our final act in Nuwara Eliya was to be ripped off by our taxi driver to the train station, who used the classic ‘I don’t have change’ gambit to relieve us of R100. Although we didn’t encounter this problem anywhere else in Sri Lanka, we had a few similar instances of people trying to squeeze extra money from us in N’Eliya.

Whilst its understandable that people are looking to supplement their incomes in this area, I would prefer to help people out by tipping or gifting them rather than being blatantly ripped off, and sadly as a result we left the area with a slightly bad taste in the mouth.

After Nuwara Eliya, it was back onto the floor of the 2nd class train carriage and onwards again to Ella. After a week of culture and a couple of long train rides, it was nice to take a bit of a breather and relax in our guesthouse (which happened to be above a pub!).

Everything in Ella was walking distance away on one large strip, which made things a lot easier. On our first day we took in a cooking class nearby and were able to make a delicious Sri Lankan curry, dhal and coconut sambal.

On our last day in Ella we climbed ‘Little Adam’s Peak’, a mountain located nearby. The walk thankfully wasn’t too challenging but still made for some excellent views when we got to the top.

Feeling rejuvenated after some hiking and resting, our next stop was one of the places that we were looking forward to the most….